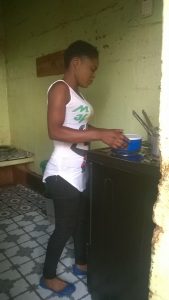 His wife falls. She lies still, breathless, without a heartbeat! Happily, he had the Morning Water in the house.

Inspector Royd Kamonga was no stranger to barking out orders to junior officers. He was neither unfamiliar with reining in control during public disturbances. Tuesday, February 7, 2017, however, was a day like no other. He risked sinking in sorrow unless he found authority of a more powerful sort.

7.30 p.m. Dorcas, his wife, and her friend had been getting ready to attend a funeral session in the neighbourhood when Kamonga walked in. Following a busy day at Manda Hill Police Post where he worked, the tired and hungry law enforcer changed clothing quickly and gobbled up dinner. At 11 p.m., his better half returned and a strange drama began.

“Welcome, dear. How did the funeral go?” Kamonga asked.

“Sadness! Real, real sadness! You should have seen how the family of the deceased wailed uncontrollably. I couldn’t hold back tears,” said Dorcas. Then she added: “Honey, I am dizzy.”

“Oh no! Sorry to hear that. It might be stress and the grief perhaps.”

“You’ll certainly get over it with some good night’s rest,” he reassured her.

Minutes later, Dorcas sat on the bed. She was restless. “Dear, I think I need to take some tablets. It’s getting worse,” she said.

She stood up. The drug box sat on a shelf. In two paces she’d have the object in her hand. But her feet wouldn’t move. At once, the box looked cloudy. She wondered why. Again, she tried to walk towards it. This time, it began to move away gradually. Soon, the floor joined in the retreat. Then the wall followed…the fan…the ceiling…everything…then DARKNESS!

It happened so quickly, Kamonga barely caught the moment. The woman who had just returned from a funeral session dropped on the bed, like a tree uprooted by a ferocious storm. “She was still. I thought it was a minor thing. But when I tried to sit her up, she didn’t move a muscle. She fell back on the bed.”

“Dorcas! Dorcas! Dorcas!” Kamonga cried repeatedly. But there was no response. His thoughts darted here and there, like a rat chased by wild dogs. “The very idea of becoming a widower terrified me greatly. I began to imagine my wife being put in a mortuary, being placed in a coffin. At the same time, I wondered how I would answer her relatives when they ask, ‘What happened to our daughter? What did you do to her?’ I began to panic.”

Still holding on to a strand of hope, Kamonga checked to see if the woman was breathing. She wasn’t. He felt her heart. There was no beat either. “My wife was not breathing and her heart stopped. It was then I realised she was dead,” he said.

He dashed to the house of his wife’s friend. They had both gone out together. He hoped she could help with moving his wife to the hospital. But she wasn’t at home. He returned soaked with apprehension.

At the desperate hour, the police inspector remembered he had an authority he could fall back on. “I don’t know where the faith came from,” he said. He rushed to the drawer, got the Morning Water and began to pray and minister it on her. “Immediately, she gasped. She started to breathe! She began to move! I continued to pray, and finally, she came to!”